History of the 16th Armored Division / "Armadillo" or "Lightning Power" 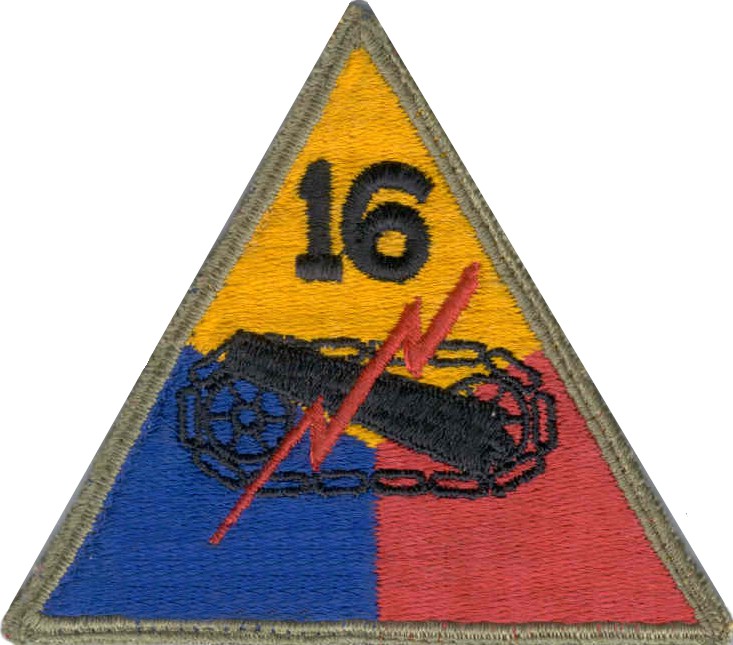 The division was activated on 15 July 1943 at Camp Chaffee in Arkansas. They performed all of their training at Camp Chaffee until they received their staging orders. They staged at Camp Shanks at Orangeburg, New York on 28 January 1945, until got their port call. They sailed from the New York Port of Embarkation on 5 February 1945.

The 16th Armored Division arrived in France in stages between 11 and 17 February 1945, and processed closer to the battle front. They had been assigned to the Fifteenth United States Army on 29 January 1945, but were waiting for an assignment to a unit actually involved in fighting.

The division was assigned to Third United States Army on 17 April 1945, and entered Germany on 19 April 1945 and relieved the 71st Infantry Division at Nürnberg on 28 April 1945. The 23rd Cavalry Reconnaissance Squadron participated in combat from the Isar River to Wasserburg with the 86th Infantry Division. While under the control of that organization, it crossed the Isar River at Granek, 30 April 1945, advanced to Indorf, seizing several small villages, and was driving toward Wasserburg against slight resistance when ordered to return to Nürnberg. The division was given a security and training mission at Nürnberg, Germany, until 5 May. When the 23rd Cavalry Squadron arrived at Nürnberg, 4 May, it reverted to the control of the 16th Armored.

The division assembled and proceeded to Waidhaus, Germany on 5 May. It was then assigned to V Corps, and attacked through the lines of the 97th Infantry Division on 6 May 1945, with Combat Command B (CCB) making the main effort. They advanced along the Bor–Pilsen Road and launched an attack on Pilsen planning to annex the Skoda Munitions Plant, Czechoslovakia, on the same day. Another Combat Command (CCR) advanced through Pilsen and overran the elevation east of the city.  The soldiers of the 16th Armored Division spent  7 and 8 May on mopping up activities and patrolling. When doing that, they lost one M8 vehicle, 17 men were injured and one was killed. The taking of the famous beer and munitions city marked the deepest point of American penetration into Czechoslovakia.

The division was located at Stříbro, Czechoslovakia on VJ Day and returned to the New York Port of Embarkation on 13 October 1945. It was inactivated two days later on 15 October at Camp Kilmer in New Jersey.