Mission Velichovky belongs among the less-known military actions of 16th Armored Division in the former Czechoslovakia. The aim of the mission was to deliver the surrender signed on 7 May 1945 in Reims to the Field Marshal Ferdinand Schörner, commanders of Army Group Centre. Colonel General Jodl was warning the allies that due to fighting with the Red Army the units may not obey or there may not be a sufficient connection. 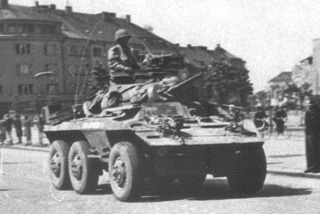 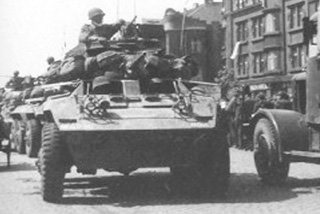 Therefore agent Col. Meyer-Detring was brought to Pilsen. He was supposed to deliver the surrender. The mission commander was Lieutenant Colonel Robert H. Pratt of the 5th Corps Staff of the 3rd Army. The convoy was under the command of Maj. Carl O. Dowd and consisted of five Ford M8, three Jeeps, two staff limousines, radio and ambulance vehicle.  The convoy was further accompanied by military journalists and a correspondent of Reuters. 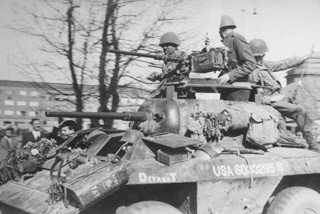 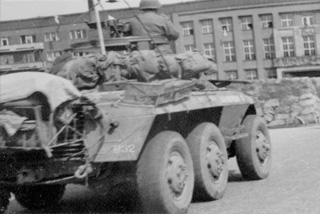 Mission pulled out of Pilsen at 9.40 PM on 07 May 1945. The route led through Žebrák, Zdice, Beroun and Motol to Bartolomějská Street to the headquarters Bartoš, where the brief hearings were conducted. After midnight of 8 May 1945 convoy continued through Poděbrady, Chlumec nad Cidlinou, Hradec Králové, Hořice and Jaroměř to a spa place Velichovky. While negotiating with the German side, the terms of the surrender were forwarded. The negotiations ended at about 11 PM. There is still a confusion whether Field Marshal Schörner was present personally. . 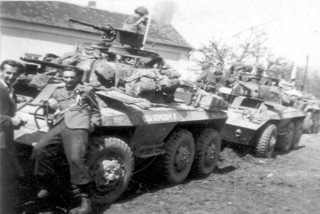 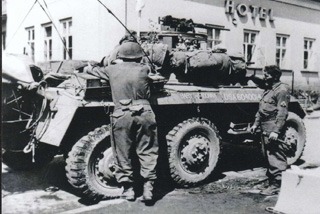 Meanwhile, the convoy caused upheaval in Velichovky and the Americans received a warm welcome from the locals. At noon, the mission headed back to Pilsen in the two groups. One went through Hradec Králové and the other via Hořice and Ostroměř. Here an incident with local partisans took place. The two groups met again in Chlumec nad Cidlinou and proceeded to Pilsen via Kralupy and Beroun. They arrived back in Pilsen at 6PM. The Red Army only became aware of the presence of the American soldiers when seeing the photos from Hradec Kralové.