Halftrack M16 Multiple Gun Motor Carriage
also known as the M16 half-track, was an American self-propelled anti-aircraft weapon built during WW II. It was equipped with four 0.5 inch (12.7 mm) M2 Browning machine guns in an M45 Quadmount. 2700 were produced by White Motor Company from May 1943 to March 1944, with 568 M13 MGMCs and 109 T10 half-tracks being converted into M16s as well. Nicknamed the "Meat Chopper", the M16 was famous for its effectiveness against low-flying aircraft and infantry, making it extremely popular with soldiers. It was used by the United States Army, the British Commonwealth, and South Korea. 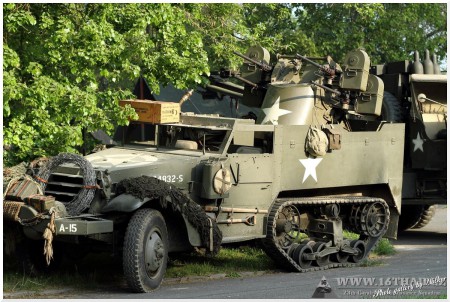